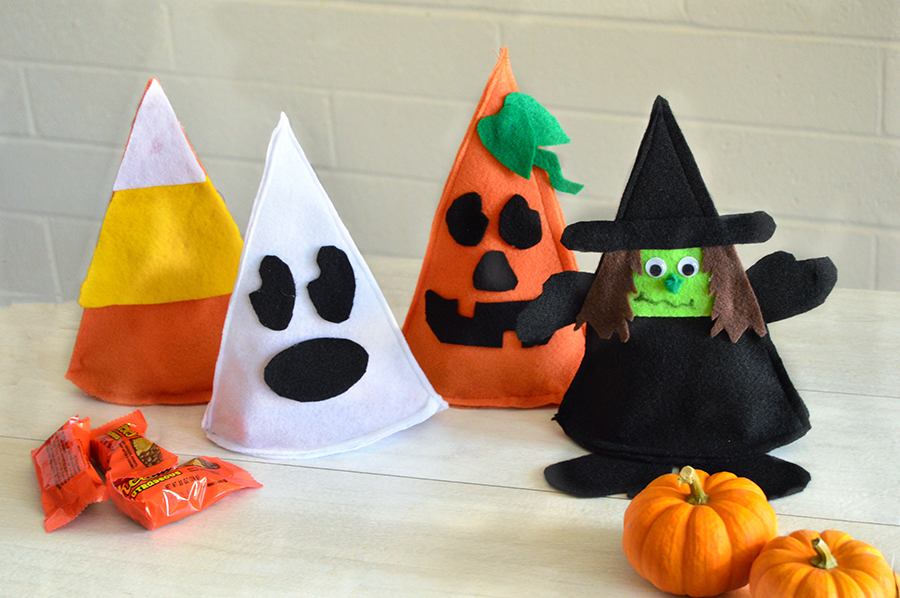 Yay for Halloween! I know I’ve posted a few Halloween things already, but now that it’s October, it’s like I don’t have to feel guilty any about it. Kind of like when Thanksgiving passes and I can blare the Christmas carols. Very freeing.

I knew I had to make these Halloween candy holders this year because it gave me a good reason to go out and buy candy early. And of course, if it’s around the house, well, it was just asking to be eaten, you know? Also the candy holders are really cute. They make up pretty easily (I made all four in about an hour) and they’re a unique gift or decoration. All you need is felt, wiggle eyes and a pompom for the witch, a glue gun, and (if you choose to sew) thread and a sewing machine. There’s also a no-sew option for those who aren’t feeling the stitching. The candy corn is done that way, while the ghost, jack o’lantern, and witch are sewn.

So without further ado, here’s how it’s done. I’ve broken it down by character, but the instructions for the no-sew version are under the candy corn if you’re interested.

Start by printing these two pattern pages and gathering orange, yellow, and white felt. I found one of the standard sized felt pieces from Walmart each was enough.

Felt Base and Body Template

Your next step is to cut out (in orange) two body pieces and one base piece.  On only one body piece (this will become your back), cut a slit about 2 inches from the bottom – this is how your candy gets in and out. From the yellow, cut out the center, and from the white, cut out the tip.

Now, these are the no-sew instructions. Sewing is done the same way, except you sew the seams instead of hot gluing.

Start by matching the base to the bottom of one side of the body. I like to match it as I glue (or sew) because it is somewhat difficult to get to match up perfectly. This is the hardest part. Promise! 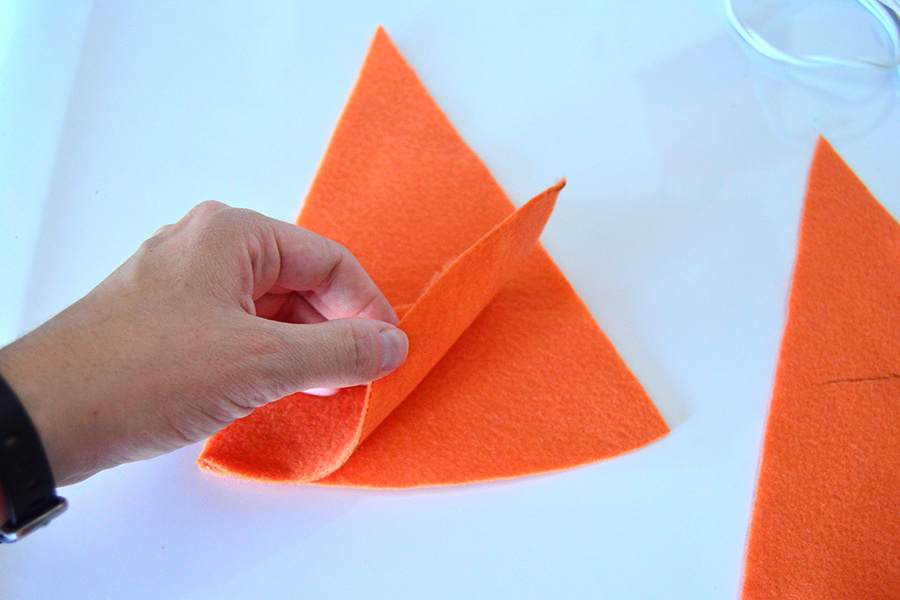 Once you’ve gotten the base glued to one half of the body, you get to glue the other half on. When both are glued to the base, it should look like this: 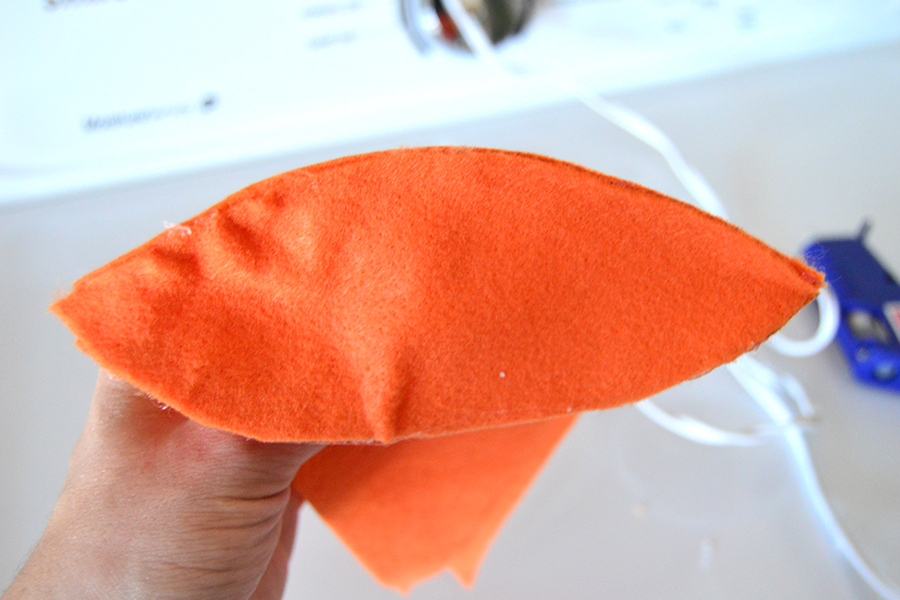 Now you’ll glue up both sides. I do one side at a time, starting from the bottom and working my way to the tip. You should now have the basic shape formed. All that’s left is gluing the white and yellow on so it looks like a candy corn.

And that’s it! Fill your candy corn with candy and enjoy 🙂 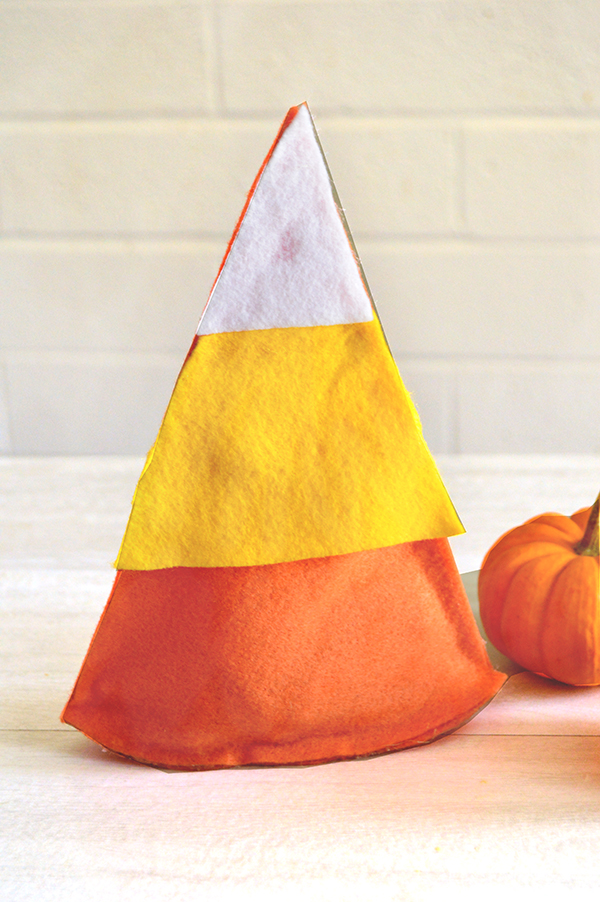 So now we go from the easiest to the most difficult. Don’t worry, though, the witch isn’t all that hard. She just has one extra step.

Witch Body and Base

Cut the pieces out in the colors and numbers indicated on the pattern templates. The base and body are cut out in black and on one of your body pieces, cut a slit 1-2 inches from the bottom (for the candy to get in and out).

To start putting her together, I’ll refer you to the candy corn tutorial for attaching the base to the body. Once you’ve gotten the base on the body, come back here…

… Good job getting that base on. Now the difference between the witch and the others is that you have to sew or glue her hands into your side seams. I set it up like this: 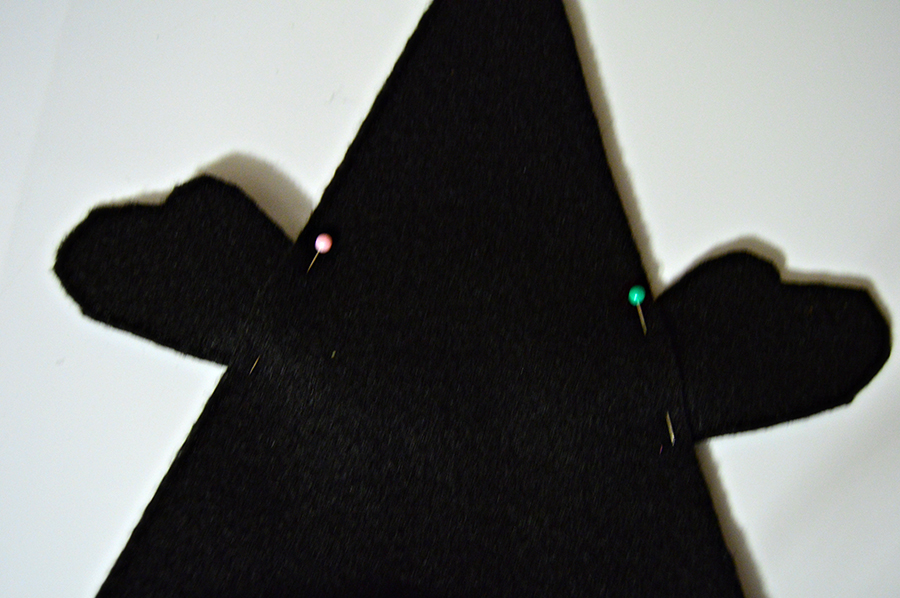 And then sew (or glue) up either side just as usual, starting at the bottom and ending at the top. The rest is super easy.

Remembering to keep the side with the slit to the back, glue the face about 1/3 of the way from the top. 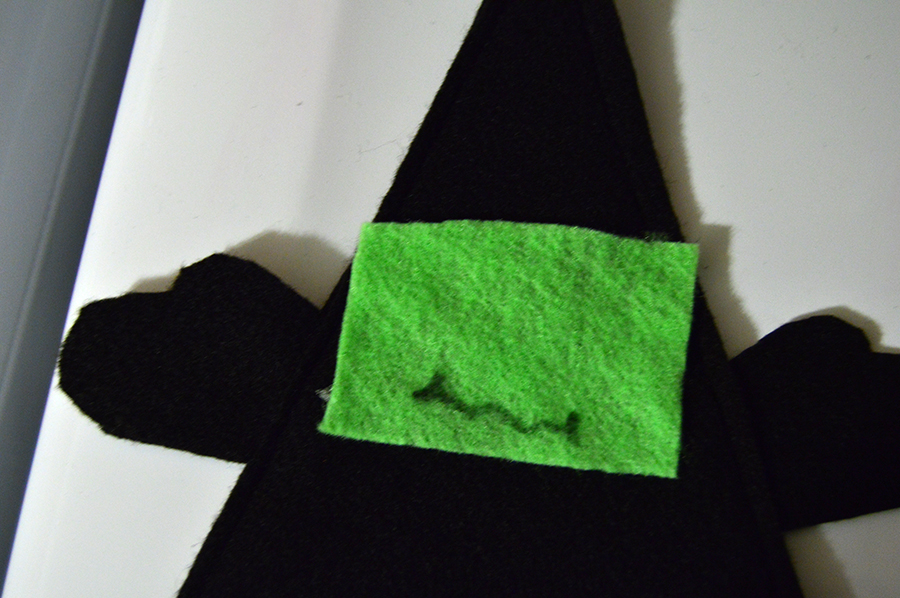 I added a little Sharpie mouth this time. Next you’ll glue her hair pieces one either side. 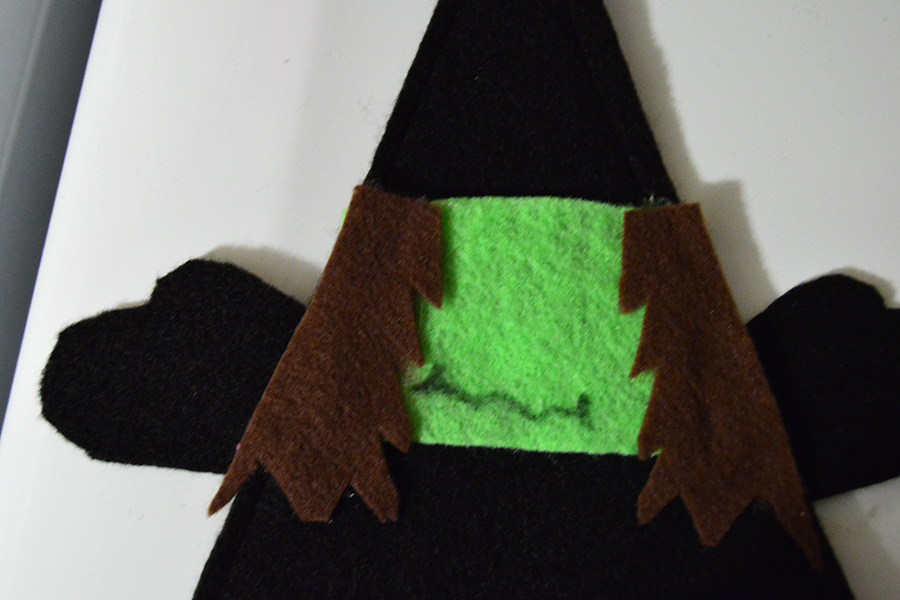 Now the hat brim and the face. I even cut my pompom a little in order to make it more pointed. I kind of like the effect. 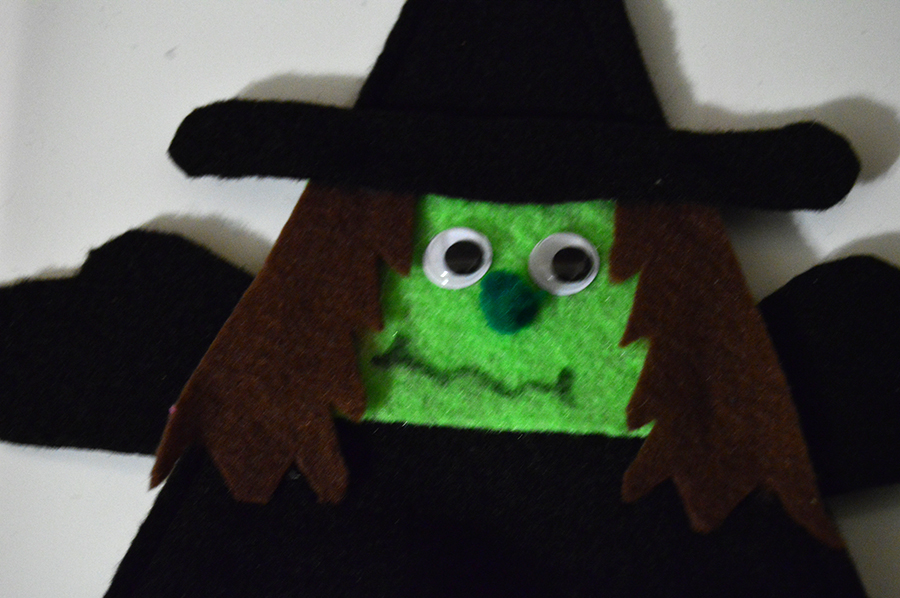 Last but not least, glue her shoes to the base. I forgot to get a picture of this part, but here’s the finished product. 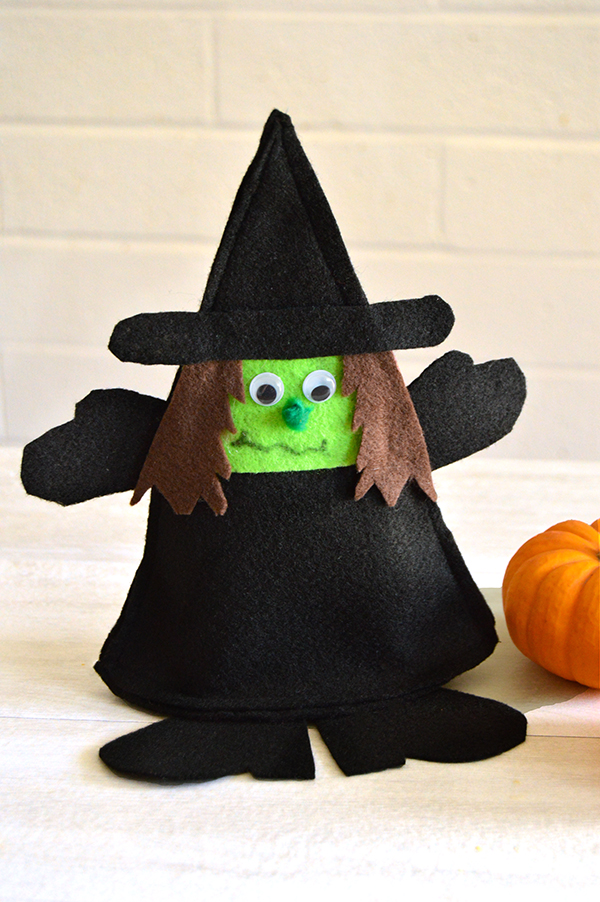 You won’t see as many pictures for these last two, since they’re a little more intuitive. The Jack O’Lantern is put together exactly the same way as the candy corn, so I’ll refer you to that tutorial. You’ll need to print out the two templates below and you’ll need orange, black, and green felt.

Jack O’Lantern Body and Base

Again, just put the base together just like the candy corn, then glue on the face and vine to get this cute guy: The ghost base and body are put together just like the candy corn, so I’ll again refer you back up for instructions. For the ghost you’ll need the two templates below, and some white and black felt.

Ghost Base and Body

I love this guy because he’s so easy. Once you’ve got the base put together, just glue the eyes and mouth on and voila! You have a ghost! 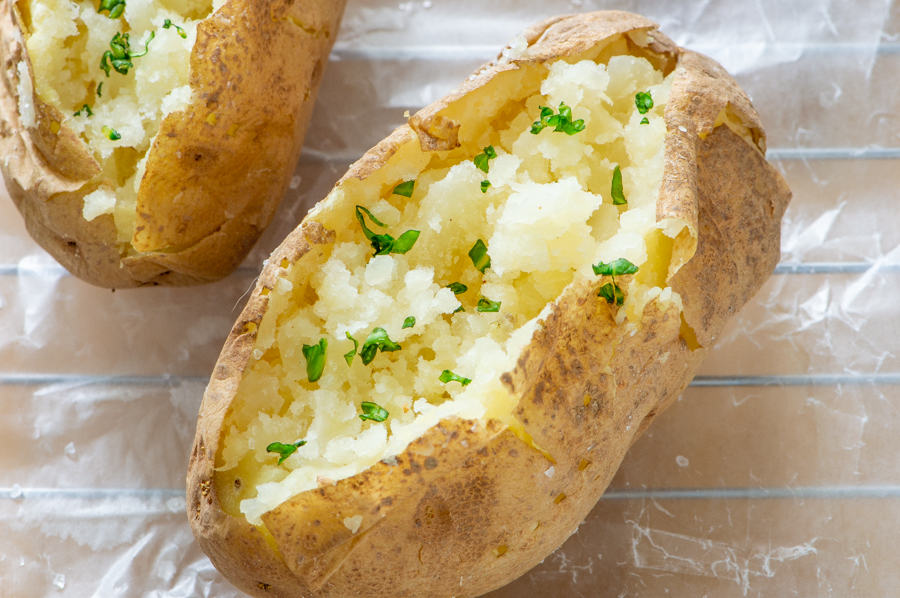 I love the witch! It came out sooo cute!

Me too! I think the pumpkin is my favorite, though 🙂

Exactly was I was looking for to do with my group of children-felters for Halloween. Great to have the templates handy in CORRECT size and ready to print. Thank you.

I’m glad this is helpful! Good luck on your project 🙂